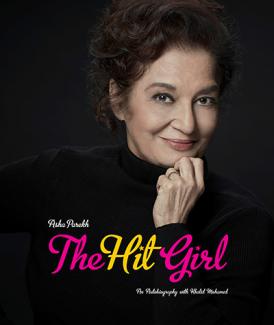 Asha Parekh was to the movies born. Ever since she was knee-high, she faced the camera as a child artiste, while performing simultaneously at dance fetes. An alumnus of Bombayï¿½s The J. B. Petit Girlsï¿½ High School, she devoted after-school hours to learning classical dance from exacting gurus. Given a break as a leading lady by Filmalaya Studioï¿½s Sashadhar Mukherjee, she debuted opposite Shammi Kapoor in the romantic entertainer Dil Deke Dekho. Instantaneously, the audience and the critics agreed: ï¿½A star is born.ï¿½ Followed a concatenation of silver and golden jubilee hits, which established her as the quintessential Hit Girl. Possessed of all the requisites of the cinema of the 1960s and the ï¿½70s ï¿½ felicity at instinctive acting, intricate dance skills and the ability to invest conviction into the roles of zestful, glamour-exuding film heroines ï¿½ she made an impact, too, with parts demanding gravitas. Apart from films in Hindi, she has also acted in films in Gujarati, Punjabi and a film in Kannada. The Mumbai film trade, to date, acknowledges her as one of the heroines with the highest number of successes. Her innumerable dance ballets on stage have earned her untold acclaim, at home and overseas. Among her other facets, she has been involved since decades in running a charitable hospital. She was Chairperson of the Central Board of Film Certification (1998-2001) and has been associated with the Cine and TV Artistesï¿½ Associations and other organisations dedicated to the welfare of film industry workers, technicians and actors. She turned producer and director with several top TRP-rated TV serials like ï¿½Kora Kagazï¿½ and ï¿½Palash ke Phoolï¿½ and programmes like ï¿½Baaje Paayalï¿½. Currently she has chosen to retire from acting, but adds, ï¿½Never say never.ï¿½ She lives by the famed Juhu shoreline in Mumbai.