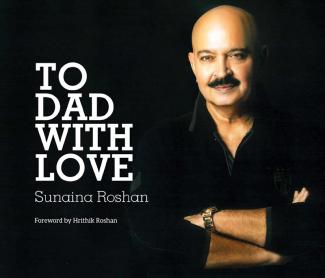 To Dad With Love

Rakesh Roshan is one of Indian cinemaâs best brands who has set trends and woven tales of valour with full conviction, constantly redefining his career on his own terms. The name Rakesh Roshan is associated with commercial and creative success, representing the true spirit of Indian cinema. Any child who was enthralled by his 2013 release Krrish 3, would, perhaps, be unaware that the master filmmaker was once an actor struggling to carve a niche for himself in an era of superstars. Ironically, he used his lifeâs experiences and education in the film industry to present and launch a gen-next superstar in his own son, Hrithik Roshan. Behind the celebrated name also lies a loving family man with a big heart, who lives his life in adherence with his beliefs and values, earning every accolade that has been bestowed on him. His journey has been like his films, strewn with Herculean obstacles that had to be overcome, and he has emerged not just as a survivor, but as living proof that hard work breeds success. Through To Dad With Love, his daughter, Sunaina Roshan, narrates her fatherâs story in the voices of those closest to him.

Sunaina Roshan was born on January 22, 1972. Even in her growing-up years, she resonated her father's personality with her love for the outdoors, and her penchant for mischief, despite her belief that If Mother was the teacher, Father was the principal. After finishing school at St. Teresa's Convent in Mumbai, Sunaina spent a year in Institut Villa Pierrefeu in Switzerland. In June 2001, she was diagnosed with tuberculosis meningitis. She conquered the medical condition silently. But all was not over yet. In October 2007, shortly after she started working with Filmkraft, her father's production house, she was diagnosed with cervical cancer. It was detected at an early stage but the road ahead was tortuous. The co-producer of Kites, Krazzy 4 and Krrish 3 rose to the challenge once again, promised her parents that she would bounce right back, and she did. Little wonder then that younger brother, Hrithik Roshan, avers that Sunaina is the real Superhero in the family.In Savvy's I Believe: Collector's Edition, Sunaina's cover feature was amongst the Top 11 inspirational stories published between 1984 and 2013.

Other Books By Sunaina Roshan